Seems that every single thing has to be smart these days. Soulmates are one like away, staying fit is a smartphone duty, vegetables are grown by an app and dogs fed by a smart home device. The list of digitalized life is endless: not only when it comes to daily routines, but also big structural bodies – cities.

UN predictions are dramatic: in 2050 more than 70 percent of the world population will live in cities. Energy consumption, access to drinking water, trash maintenance, inner city mobility and many more – if the UN is right, challenges for governments and all of us are countless. One becomes clear: cities as we used to know them have to change. They have to become smart.

The city as an intelligent ecosystem 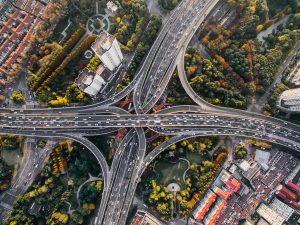 The rule is simple: smart cities need smart citizens. Starting with local level initiatives and moving toward a digital revolution that creates an intelligent city ecosystem.

Boosting digitalisation in cities is not about spending money, it´s about an investment to save it. Smart city solutions lead to a higher efficiency in data exchange and services and thus more efficient management of resources. Digitalisation enables easier access to first aid as well as provides intelligent mobility systems and an ability to track and extinguish water wastage thus making a huge contribution to climate protection.

According to a study conducted by Gartner, with help of sensors around 1.1 milliard traffic lights, electric meters and rubbish containers will be connected in the following years. Some communities, however, look for drastic solutions – instead of digitalising existing cities they just build the new ones.

One cannot talk about intelligent cities built from scratch without mentioning Masdar. The city in Abu Dabi is the world´s first planned sustainable city. Although Masdar´s zero carbon dreams might have been too big, the city has designed a unique environment that mimics the cyclical behaviour of natural ecosystems. Digitalized networks connect pretty much everything in Masdar in this way monitoring energy consumption, protecting climate and drastically reducing CO2 emissions.

While Abu Dabi is raising new cities, European countries focus on digitalising the existing ones. With the city of Santander being a pioneer.

From pollution, heavy traffic and unrecycled waste to an exemplary digital nerves system: Santander is a city that has been reborn. Well, at last reinvented. All thanks to a scientist Luis Munoz, who collected the data and used its digitalisation as a solution for the city to survive.

Santander (also often referred as Smartsander) has around 12.000 sensors that connect pretty much everything that is possible to connect. They are installed on dumpsters to signal when they need to be emptied and are buried in green city areas to measure soil dampness. And not only that. Sensors measure brightness outside to choose appropriate street lightning, observe gas emission and inspects the volume of the sound.

In the recent years much has been spoken about smart living, digitalisation and the Internet of Things. No wonder why: IoT touched all areas of life. Navigation systems, voice commands or automated home devices control became an essential part of our daily routines, while cities have increasingly used it to make informed decisions and improve services including air quality, energy use, traffic flows and assets utilisation. IoT is not a futuristic vision anymore, it´s a way of living in an urban digitalised world.

Share on FacebookShare on TwitterShare on Google+Share on Linkedin