With levels continuing to rise, air pollution is one of the worst environmental and health crises of modern times. Despite communal attempts to reduce urban air pollution levels, world Health Organisation (WHO) states that between 2008 and 2013 global they increased by 8% among cities that had them monitored.

Compared to previous decades stringent measures to prevent emissions from the industry, transport and private households have helped to significantly decrease air pollution in countries like Germany. However, concentrations of particulate matter and nitrogen oxides still exceed current limit values.

According to BreathLife, a campaign launched by WHO, the air in Germany’s capital Berlin has an annual average of 16 µg/m3 of PM2.5 particles, which is 60% more than WHO safe level.

Transport to contribute by 25%

Energy consumption, road transport, agriculture, the production of goods and other human activities cause air pollution. The transport of people and goods, however, is one of the major sources of air pollution and carbon dioxide emissions. According to Sustainable Mobility – Made in Germany report, transport accounts for one quarter of CO2 emissions in EU. 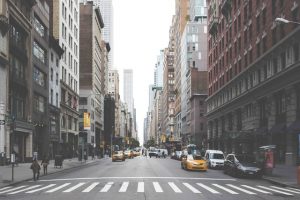 Cities have many solutions to reduce air pollution quickly and at scale. It includes both the practical policy measures that cities can implement to improve the air such as better housing, transport, waste, and energy systems and measures people can take as communities and individuals: from stopping waste burning to walking, cycling and promotion of green spaces.

Changes in the current transport system and its digitalisation thus are the backbones for dramatically reducing air pollution. This include measurements in urban areas like public transport improvements, car sharing systems and development of smart parking.

Introducing smart parking is one of the ways to tackle air pollution in cities. The average city driver spends 6 to 14 minutes searching for a parking slot, which is said to be the cause of around 30 percent of congestion on city streets.

Share on FacebookShare on TwitterShare on Google+Share on Linkedin